Wednesday, President Donald Trump signed a series of executive actions that certainly put the immigrant community on notice that he’s serious about the talking points that were part of his campaign from the start. He directed the building of a wall on the United States-Mexico border and taking measures to strengthen border security, and called for the federal government to withhold federal grant money from “sanctuary cities.”

"Beginning today, the United States of America gets back control of its borders," he said in a ceremony at the Department of Homeland Security’s headquarters in Washington, D.C..

As disturbing as these developments sound, what they mean isn’t clear yet. Part of Trump’s promise of a wall was connected to the premise that Mexico would pay for it, and that America would, in effect, get a free wall. Mexican President Enrique Peña Nieto has insisted from the start the under no circumstances would Mexico pay for such a wall, and when he recently reiterated that stance before announcing that he planned to travel to Washington to meet with Trump, Trump tweeted, "If Mexico is unwilling to pay for the badly needed wall, then it would be better to cancel the upcoming meeting.” Today, Peña Nieto took him at his word and cancelled the the trip. 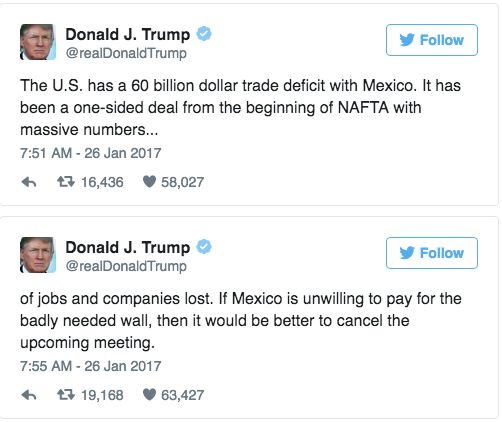 It remains to be seen if deficit-averse Republicans in the House and Senate are willing to take on a project that has been estimated to cost between $15 billion and $25 billion without its proposed funding source locked in place.

Similarly, Trump can direct the Department of Homeland Security to withhold grant money from “sanctuary cities,” but since there is no official definition of “sanctuary city,” it’s not clear how that will be implemented either. Mayors from around the country have so far stood behind their policies regarding undocumented immigrants. The New York Times quoted Chicago Mayor Rahm Emanuel, who said, “I want to be clear: We’re going to stay a sanctuary city. There is no stranger among us. Whether you’re from Poland or Pakistan, whether you’re from Ireland or India or Israel and whether you’re from Mexico or Moldova, where my grandfather came from, you are welcome in Chicago as you pursue the American dream.” New York Mayor Bill de Blasio said, “We’re going to defend all of our people regardless of where they come from, regardless of their immigration status.”

Sanctuary cities generally offer undocumented immigrants some measure of protection, ranging from a refusal by cities to use their jails to hold detainees for ICE, to a refusal to have police officers inquire about a suspect’s immigration status when dealing with him or under for other reasons. Currently, cities are required to share immigration information that they have with ICE, and Trump appears to be looking for an expansion of “share” that would also involve collecting it. Currently, cities can’t share information that they don’t have, and Trump’s lawyers will likely have to ask the courts to interpret “share” broadly enough to compel them to.

In an interview with Henry Grabar at Slate.com, University of California-Irvine law professor Annie Lai expressed doubt that Trump’s lawyers could successfully broaden the interpretation U.S.C. 1373. “The Attorney General and the secretary may have an interpretation of 1373 that may go beyond the express terms of the text,” but recent court decision suggest that their interpretation won’t hold up in court.

Trump is also expected to sign an executive order that will put a hold on immigration through legal means for 30 days from such predominantly Muslim countries as Iran, Iraq, Libya, Somalia, Sudan, Syria and Yemen, but the text of it has yet to be officially released or signed.

If these executive orders manifest themselves in their most draconian form, that would have a chilling effect on the immigrant community in the U.S., but it’s hard to imagine that they’ll be anything more than signposts telling us the direction Trump intends to go any time soon.