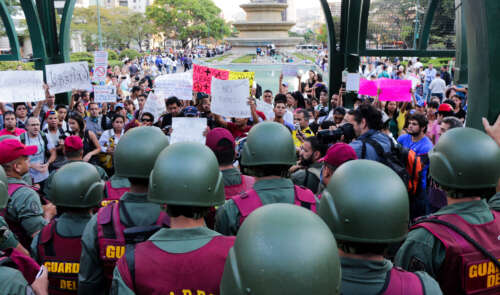 In another sign that we have a new administration, the United States granted temporary protected status (TPS) to Venezuelans on Tuesday. Former President Donald Trump repeatedly worked to end TPS status for those in the U.S. from Sudan, Nicaragua, Haiti, Honduras, and El Salvador, but President Joe Biden has responded to the humanitarian crisis in Venezuela by announcing via executive order that Venezuelans who were in the country as of Monday would have 180 days to go through the process of applying for TPS, which would allow them stay with legal status.

According to Homeland Security Secretary Alejandro N. Mayorkas, “The living conditions in Venezuela reveal a country in turmoil, unable to protect its own citizens. It is in times of extraordinary and temporary circumstances like these that the United States steps forward to support eligible Venezuelan nationals already present here, while their home country seeks to right itself out of the current crises.”

Conditions have deteriorated in Venezuela under President Nicolás Maduro, which has prompted more than four million people to flee the country and the poverty, hunger, and repression experienced there. President Trump recognized the severity of the situation and as one of his last acts signed an executive order that deferred removal proceedings for 18 months for Venezuelans in the U.S. without authorization. Before that, Senate Republicans had blocked the Venezuela TSP Act of 2019 for more than a year.

The extension of TPS to Venezuelans is a step up from the Trump solution, but it only came after Venezuela’s neighbor Colombia made a similar decision first. In the first week of March, Colombia's president, Ivan Duque, extended TPS to Venezuelans in the country and created a path to citizenship for those that wish to stay. In an interview with NPR’s Ari Shapiro, Duque explained that he did so in part to prompt other world leaders to take action, and because the step is good business.

“We can do something that is humanitarian but, at the same time, that is an intelligent and sound migration policy because they will have to register,” he said in the interview. “But at the same time, once you regularize, well, people can open bank accounts. People can buy houses. People can work and can work legitimately without disturbing or disrupting the opportunities for the Colombian people.”

Those from Venezuela who are affected by the new executive order should consult with an experienced immigration lawyer to see how the decision might affect them, and to see if there is a path to more permanent status.