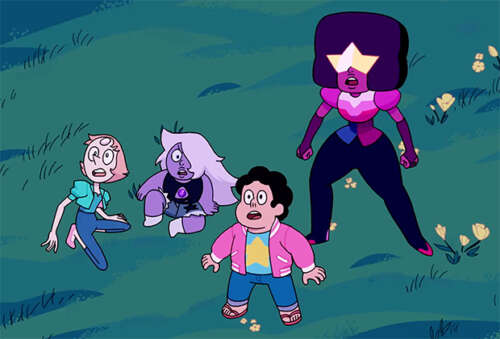 It’s hard to imagine that many immigration lawyers are spending time singing the praises of Steven Universe, buta column in The New York Times on Sunday made writing about the Cartoon Network show not only possible but relevant.

The show tells the story of a boy who is the son of a father from Earth and an alien mother from the Gem Homeworld planet who presents in the form of a seven-foot tall woman with a headful of pink, Dolly Parton-in-the-Seventies curls. She had to give up her form and gem to give birth to Steven, who is raised by three of her lieutenants, each with super powers tied to their gems. The show and the mini-series Steven Universe Future that serves as its coda perform an impressive balancing act, remaining a kids’ show while dealing sensitively with complicated emotions. In its later seasons, Steven splits his time between fighting a fascistic empire in the far reaches of space and helping his friends start a garage band in his hometown of Beach City. Empathy and inclusivity are central to the show, and they’re handled deftly with precision.

As the parent of a little girl, I’ve loved the way series creator Rebecca Sugar presents a range of very different, very specific female characters, each with different body types and individual personalities. She treats Steven’s Beach City community with similar care, giving Steven a best friend of Indian descent whose mother is a doctor and whose father works private security. His favorite pizza parlor is run by Kofi, who is from one of the Caribbean islands. Kofi lives with his mother and twin, teenaged daughters, and the generational challenges faced by families with parents raised in one country and kids in another affect Kofi’s family dynamics. No scene in the show utters or underlines that fact; like so much of the show, these details are presented as natural and normal, not needing explanation. And they don’t.

In Sunday’s New York Times, writer Nicole Clark explains how the specifics of Steven’s biracial nature—half-human, half-gem—helped her process her own experience growing up in California as the daughter of a Taiwanese mother and American father. Because Clark’s mother left Taiwan, that part of her heritage and her mother’s experience took on almost mythic importance, just as Steven’s relationship to his mother and Homeworld are the mysteries he has to solve in the storylines and himself. Clark writes:

What remains personally true is the immense pressure I felt to succeed, because my achievements felt like proof of concept: Proof that leaving Taiwan was worth it, proof that we could attain and even improve upon the American dream.

I learned to create my own community in the language of code switching between my Taiwanese family in California and my dad’s family in Kentucky. My personality became circumstantial, less a person than an echo of the space I lived in.

This is also Steven Universe’s lot in life, and much of the show is dedicated to his earnest blunderings. Though he looks like a human boy, he carries his mother’s gemstone in his bellybutton. He shuttles between Crystal Gem missions and spending time with his human father and friends in the fictional Beach City. He accidentally summons his powers in the presence of his human friends, though he struggles to invoke them during missions.

Right now, my Facebook feed is full of people looking for something new to binge while social distancing. Steven Universe is on Hulu, and it’s hard to imagine more effective counter-programming for the moment at hand.