Spivey in AP Story on Soccer Coach in Immigration Limbo 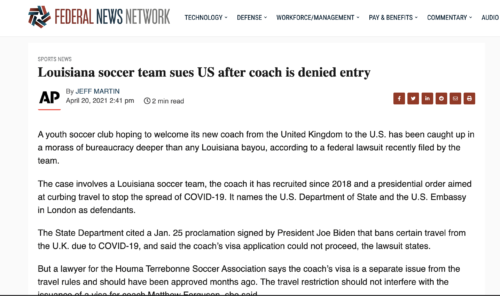 Many of the cases we handle as immigration lawyers are fundamentally bureaucratic. We work to get Official A to approve Document B. Unfortunately, trying to make that happen often reveals the stress points in our system and the ways that it can inexplicably fail. The cases we work on rarely get attention because the drama in them isn't obvious, but they affect people's lives in very real and painful ways.

This week, Leah Spivey appeared in an Associated Press story for a case she’s working on that involves the Houma Terrebonne Soccer Association and the delay it has faced while waiting for the British soccer coach they hired to be allowed to relocate to the United States to start work. Coach Matthew Ferguson was told that his application was complete on February 18, 2020 after an in-person interview in the UK, but he remains in limbo still. In January, The State Department pointed to an executive order signed by President Joe Biden in January to defend the delay, an order that Spivey says doesn’t apply in this case.

In the story, Jeff Martin writes:

“This is a case where you have an employer who has expended a lot of effort recruiting someone and they’ve been caught up in this morass, this mess of bureaucracy,” Spivey said Tuesday.

The visa should have been issued long ago, she said, “but we’re still dealing with hitting our heads against a brick wall. It’s very frustrating.”

Read the story in its entirety.