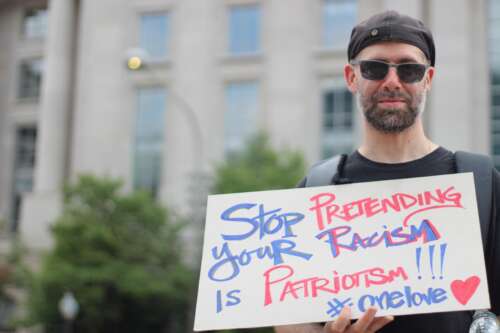 There are plenty of news sources out there with reviews of the new executive order. (We will have the nitty gritty of that in a separate post). The text may be new, but the spirit and intent are not. From the very first orders in early 2017, the immigration agenda of this administration has been clear: spread fear, emphasize xenophobia, and stop all immigration from countries the administration sees as lesser.

The Executive Order that President Trump signed on Wednesday did spread fear. In fact, it spread so much fear that when I read the order, my first thought was Thank goodness this is all it is. And then I got mad. I got really mad at how disgusting this is. Because let’s be very clear about what kind of immigration this order blocks: families of permanent residents and those who are selected in the diversity lottery.

This order stops the issuance of immigrant visas at embassies. In non-lawyer terms, it stops people from getting stickers in their passports that let them enter the U.S. as permanent residents. The order carves out a bunch of exceptions including those coming to the US as spouse of a citizen or those coming because they are investing a million dollars in the U.S.

In FY 2018, about 528,000 people obtained immigrant visas at U.S. Embassies. That is less than one quarter of one percent of the total population of the United States. Spouses and kids of citizens (about 160,000) make up a good portion of that number. Those obtaining work-based immigrant visas at the Embassy was a small fraction of that at roughly 20,000. Most individuals obtaining permanent residence through work do so thorough a process called adjustment of status within the U.S., a process not impacted by the most recent order. Once you take out the 8,000 investing money in the US, the rest of that number are lottery (about 44,000) and spouses and kids of permanent residents and families (parents, adult children, and siblings) of U.S. citizens. The families that will remain separated predominately come from Mexico, Cuba, China, India, the Dominican Republic, and the Philippines.

Stopping lawful immigration that is less than one-tenth of one percent of our population does nothing to "protect our great American worker"--Trump's official rationale for the Executive Order. The American worker would be better protected by universal healthcare or simply affordable health insurance. A living minimum wage would also help. So would leading our country with a message of unity, community, and support. Spreading fear and spinning mythologies of the immigrant enemy is divisive and does nothing to help our country.

Nearly 29 percent of all U.S. physicians, 22 percent of nursing assistants, and 38 percent of home health aides are foreign born; together, foreign-born workers make up 17 percent of the entire health care and social services industry. (see Center for American Progress) We thank them for their service in these challenging times, and we thank every immigrant who is here. Thank you for believing in America. Thank you for wanting this country to be your home, the home of your family, and the home of your future. We welcome you and yours as our neighbors, our community, our teachers, our leaders, our support. May we as a country care for you the way that you care for us.

(Photo by Melany Rochester on Unsplash)